I’ve been visiting Cafe 66 for quite a few times, so when I saw the pictures of Adriana, which reminded me a bit of Naty’s allure (Naty Office) which also worked here for a short time not long ago, I was attracted immediately.

Agreement was fast as always; the photos fit, she has this typically Russian face, though says she’s Czech, and that she usually works as a dancer/stripper, but now doing this because of the known situation. Very slim, beautiful ass, nice tits, though just a bit saggy. She smells good, has a beautiful smile, but there is some coldness in her, not sure if it was mainly the language barrier, as her English is not the best, but at least she was willingly communicative.

To the action itself, I was tempted to go for 1h, but as she didn’t even offer OB and no licking or fingering allowed, I stayed for only 1/2h. She’s quite mechanical, though very beautiful, has a narrow pussy (used lube) and does not do eye contact during the action in missionary. When fucking her in doggy, it was very awkward, she kept positioning herself to one side in a very weird way – as if she didn’t know how to stay and get pounded in that position properly … very strange (maybe some pelvis issue, or I was hitting a painful spot, I don’t know..), so I turned her around and finished in missionary.

Overall if you’re looking for a very hot looking young blondynka, she’ll do fine, but don’t expect GFE or any extras (don’t know if it was just me, or if she does not offer OB/licking in general). Neutral experience from my point of view, not going to repeat as it did not have any WOW-effect on me. 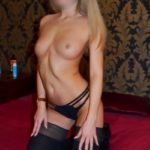 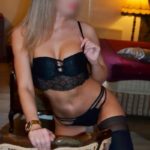